Today I'm delighted to bring you my conversation with Pacific Northwest author Leslye Walton, who tells us all about magical realism and the world of her debut novel The Strange and Beautiful Sorrows of Ava Lavender! 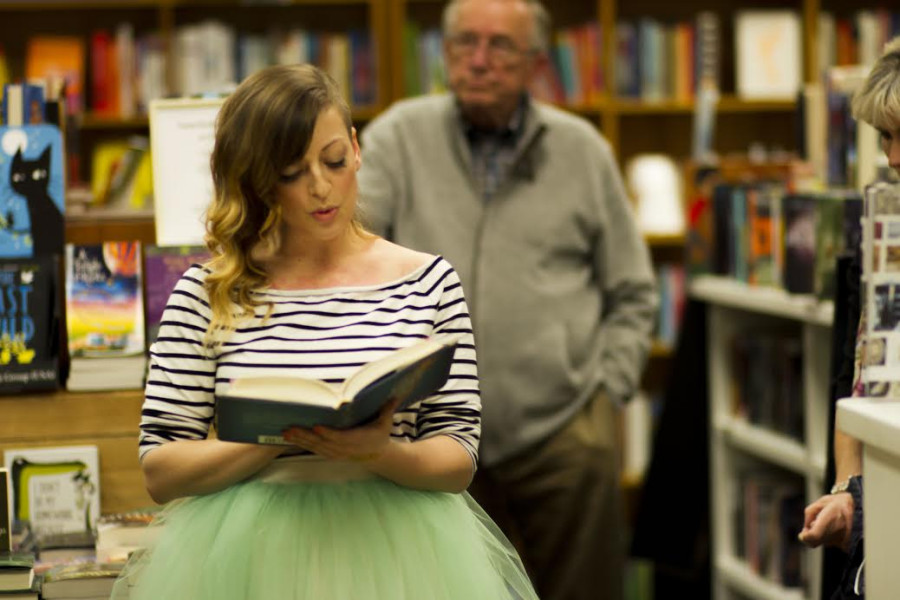 The Strange and Beautiful Sorrows of Ava Lavender written by Leslye Walton, published by Candlewick Press.

Born with a pair of wings, sixteen-year-old Ava Lavender inherits a rich family history and a legacy of heartbreak. After a young man becomes convinced she is an angel, can Ava survive his obsession intact?

And her haunting book trailer:

--First, give us the vital stats on THE STRANGE AND BEAUTIFUL SORROWS OF AVA LAVENDER. What was the inspiration for the novel?

The Strange and Beautiful Sorrows of Ava Lavender started out as a short story that came to me while listening to the song “I Just Don’t Think I’ll Ever Get Over You.” I remember listening to the lyrics, “If I lived till I could no longer climb my stairs/I just don’t think I’ll ever get over you” and pondering the logic, or lack thereof, in love—the ways we coax ourselves to love, to continue loving, to leave love behind. And through this thinking arose Viviane Lavender, a girl who loved a boy her whole life. I imagined the burden of this love, the many ways she’d try to free herself from it. I imagined the immense weight of loving someone who didn’t, or perhaps couldn’t love you back, and how it would define every step you took from that point on.

Over the course of a few months, more characters began showing themselves to me, revealing their intricate place in this now-evolving story. Henry was based on an autistic boy I taught who had a preoccupation with and remarkable aptitude for mapmaking. Trouver was a neighbor’s dog I walked to earn money while in grad school. But it was Ava who changed everything. At the time, I was playing with the idea of introducing characters through detailed descriptions of photographs. I was looking at a picture of my younger sister, taken when she was perhaps eleven. To be honest, I’m not even sure if the image itself actually exists, or if it merely an image that I recall when thinking of my sister as a young child—all long limbs and big teeth, wearing oversize white T-shirts, and running, always running, her shirt billowing out behind her as if she had wings. And it was in that description that I came to a stop, my fingers poised over the keyboard, and I thought No. Not as if she had wings. She has wings. And in that, I also realized I had no idea what I was writing. I didn’t write again for weeks.

How long did it take to write?

It took about two years to write. I spent the next few summers editing here and there until I started sending inquiries out to agencies.

Was this truly your first book, or are there secret manuscripts lurking in desk drawers or dark closets?

Yes, this truly was my first novel. In fact, it was the first long piece of fiction I had ever attempted.

--Everyone loves to hear great stories about The Call! Would you share yours? How did you hear about your Morris Award nomination?

I actually found out about the Morris Award nominations through Twitter! But, of course, me being me, I just thought I was included in the tweet because the literary world wanted me to know about these fabulous pieces of literature by debut writers! I remember thinking, “That’s so nice of them. I’ll have to make sure I add those to my ‘To Read’ List!” It wasn’t until I received a phone call from my editor, Mary Lee Donovan, that I realized I had been nominated as well!

How familiar were you with your fellow finalists’ work?

I think Scar Boys’ release date was close to mine--I’d also recently met Len [Vlahos] at the Texas Teen Book Festival in October—so I was familiar with his novel. I wasn’t as acquainted with the other wonderful nominees, but I have since read their novels, and I have to say, I’m quite honored Ava Lavender has been included on such an extraordinary list.

-- Tell us about your path to publication and your writing process. You have a master’s degree in writing; did you work on AVA LAVENDER as part of that program?

Yes, I did. In fact, I was a bit obsessed; while many other people in my graduate program were getting published in literary magazines and winning awards, I was just writing this little book of mine. I was determined to have a finished novel by the time I had graduated.

--What can readers expect next from you?

I try to keep pretty quiet about my next projects, but I will say that readers should probably expect more magic, a PNW [Pacific Northwest] setting and a new assortment of bizarre (and yet hopefully charming) characters.

--As a writer of traditional fantasy, I’ll admit to being fascinated by magical realism—the matter-of-fact way that marvels occur in the everyday lives of the characters (such as Emilienne’s mother literally fading away from grief). It’s a decidedly different sort of “fantastical” than, say, 2013 Morris winner SARAPHINA by Rachel Hartman. Would you talk a little about the craft of writing magical realism; what drew you to it; and how you strike that extraordinary balance between the wondrous and the mundane and get them to coexist so effortlessly?

I started writing Ava Lavender not exactly knowing I was writing magical realism. I originally thought it was merely a historical fiction novel about this completely average family. All of that changed when I suddenly realized one of my main characters was a very average girl with an extraordinary abnormality. After that, I didn’t exactly know what I was writing because it wasn’t just historical fiction, but it wasn’t fantasy either. Sometime after that, I was handed Gabriel Garcia Marquez’s One Hundred Years of Solitude. Reading that book was like hearing a language I thought only I understood. From there, I realized these ordinary characters weren’t quite so ordinary at all, and yet, they were very human and their stories were ultimately quite universal.

The secret to magical realism—or so I’ve heard—is to write in a way that your reader will believe the real as much as the magic; you want the two worlds to weave together seamlessly. With this in mind, I tried to place these peculiar creatures in a setting with which I was familiar—to counter the weird, so to speak.

--The novel is named for Ava, but she’s just one of several generations of remarkable women in her family whose intertwining stories make up this extraordinary tale. How did you decide who the title character would be? What would you say makes the story “hers,” more than Viviane (so gorgeously, heartbreakingly named, by the way!) or Emilienne?

I have a deep love for names, so thank you for that! I think the story had to be Ava’s because ultimately, she was the pinnacle point, the physical manifestation of all the challenges and failures and regrets of her ancestors. It all kind of lead up to her.

--Reading this novel made me so hungry! Please tell us about your obsession with French pastry, and whether readers will be craving carbohydrates after all your books?

I’m not sure if food will always play a big part in my novels. Yes. I often frequented the local patisseries and boulangies, learning everything I could about the inner workings of a bakery and eating tons of pastries. I was living in Portland, Oregon and fortunately there were quite a few bakeries—some even French bakeries specifically—within walking distance of my apartment. I ate my way through the city—croissants, pain du chocolat, napoleans, macarons. The funny part is that it turns out I’m gluten intolerant, which explains why I was so sick while I was writing this book. But what’s the saying? Art is pain?

--Can you describe your experience being a first-time novelist? Has it been what you expected? Any wisdom or insights or surprises to share about the joys or challenges of life during and after the first book?

I think a part of me expected my first novel’s launch into the world would go by unnoticed. There are so many incredible novels out there; I know I don’t have enough time to read all the books I want to! I feel honored that anyone has thought to pick up and read this little book of mine. It’s still so exciting to walk by a bookstore and see my book in the window.

--And finally: How much do you love librarians?

I’ve always loved librarians. I remember the first time I ever checked out a book on my own—I think I might have been seven years old, and I still remember the name of the book I checked out (It was No Roses for Harry), as well as the librarian who helped me! 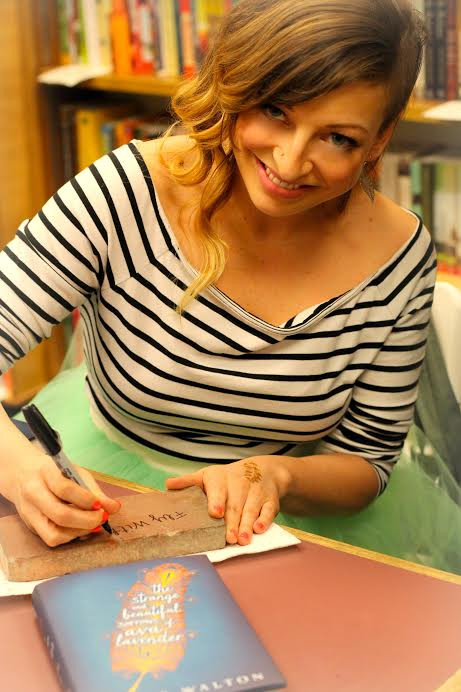 Thanks so much, Leslye!

Stay tuned for our next interview, this Thursday, January 22, when John Corey Whaley interviews Len Vlahos about The Scar Boys.